Are My Ducklings' Leg Problems Due to a Niacin Deficiency?

Niacin is a critical vitamin required for the correct development of ducklings and goslings.  In fact, waterfowl have a higher requirement for niacin (also called nicotinic acid) than chickens.  Niacin is formed from the amino acid tryptophan and waterfowl do not synthesize niacin well from tryptophan.

What do the birds look like if there is a niacin deficiency?   If there is a lack of niacin in their feed, initially some birds are reluctant to move about.    Eventually their hocks swell and their legs develop a bowed shape.  It becomes very difficult for them to move about and they do not gain weight or thrive.  In young birds you will see problems within several days if they do not have adequate niacin.  If they remain on a low niacin diet, death may occur within two to three weeks as it is just too painful for the birds to move to eat and drink. 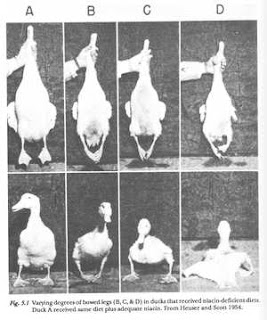 A series of pictures from the book,  Nutrition and Management of Ducks, with permission of the authors, showing a normal duckling (A) and ducklings (B,C,D) that were fed Niacin deficient diets.

How can this happen?  If you are not using a balanced chick starter designed for broiler chicks or game birds, you may have problems.  If you are using a chick starter developed exclusively for laying chickens, it probably does not have enough niacin.  Do not make their diet exclusively whole grains, like Chicken Scratch.  On very rare occasions, the lack of niacin could be from a mistake at the feed mill.

So how much niacin do waterfowl require?  It should be at least 55 parts per million (ppm).  This is the same as 55mg per kilogram of feed or 55mg per 2.2 pounds of feed.  Oftentimes this is not on the label but if you contact the manufacturer of the feed, they should tell you the minimum guaranteed level in the feed.  You can go to our website for a complete list of waterfowl nutrient requirements. 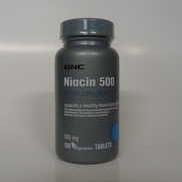 A bottle of Niacin tablets, 500 mgs per tablet.

How can I supplement niacin?  Niacin can be easily purchased at a nutrition or drug store.  Typically the pills contain 500 mgs of niacin per tablet.  Assuming a duck is eating about .35 lbs per day (this is how much a Pekin is eating at about 3 -4 weeks of age) , they need 10 milligrams (mgs) of niacin a day.  So, theoretically, one pill has enough niacin for 50 ducks.  But if you are grinding up a pill and spreading it over pelleted feed, much of it will sift to the bottom and not be consumed.  Add a little water to the feed and it will “stick” to the pellets.

An alternative is to add it to their drinking water (assuming they have no swimming water).  If they drink 100% of the water you give them, you only need to add one 500 mg tablet to every 8 gallons of water.  But we both know that does not happen.  If you think they are wasting half their water, then add one 500 mg tablet to only four gallons of water.    For your own calculations,  go to the table on our website on daily feed and water consumption of ducklings. 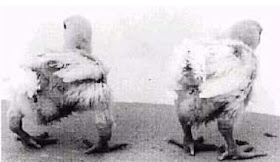 Two broiler chicks, the one on the left was fed a niacin deficient diet.
Photo courtesy of DSM Nutritional Products.


Are there alternatives to pure Niacin?  If you are concerned with the possibility that other vitamins may be missing, too, you can purchase Vitamin B liquid supplements.  The GNC product I found had 20 mg of niacin per dropper full.  This is enough for two ducks that are 3-4 weeks old.  This might be the best way to administer niacin if your birds are exhibiting leg problems.  By administering the niacin to each bird,  you will know they are getting the required niacin.

If you are not sure if your problem is due to inadequate niacin, give them some sort of additional niacin as soon as possible.  You will not harm them if you give them too much niacin.  And if they quickly recover, you know you found the problem.

What if only a few of my birds have leg problems?  Variability within a flock is normal.  Each bird varies on how well it forms  niacin from tryptophan, either due to genetics or the different microflora  in their gut.  It would not be unusual to have a single flock of birds, with some exhibiting a niacin deficiency and others walking perfectly normally - but all eating the same feed. 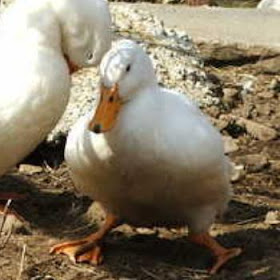 Glory, a duck that was rescued by Majestic Waterfowl Sanctuary,  arrived with leg problems due to a niacin deficient diet.

How long does it take for recovery?  Except for the extreme cases such as the picture above, improvement is normally seen within several days and there can be complete recovery.  But this requires adequate niacin within 24 hours of the first sign of a problem.
Share